I ran across this great article, written in 2010 by a fellow blogger.  Quite an interesting and accurate take on President Obama.  And a touching picture don't you think? 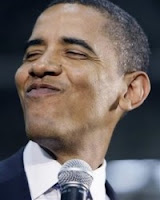 I have this theory about Barack Obama. I think he’s led a kind of make-believe life in which money was provided and doors were opened because at some point early on somebody or some group took a look at this tall, good looking, half-white, half-black, young man with an exotic African/Muslim name and concluded he could be guided toward a life in politics where his facile speaking skills could even put him in the White House.

In a very real way, he has been a young man in a very big hurry. Who else do you know has written two memoirs before the age of 45? “Dreams of My Father” was published in 1995 when he was only 34 years old. The “Audacity of Hope” followed in 2006. If, indeed, he did write them himself. There are some who think that his mentor and friend, Bill Ayers, a man who calls himself a “communist with a small ‘c’” was the real author.

READ THE REST OF THE ARTICLE BY CLICKING HERE

Mr. Caruba concludes with this,

"We laugh at the ventriloquist’s dummy, but what do you do when the dummy is President of the United States of America?"


A great question and one we all need to come to grips with!