Yet another Reason to Vote for Trump! 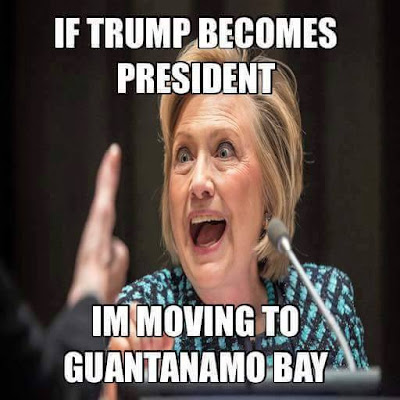 Hopefully to serve her term for treason!

Trump is not a liberal or conservative, he's a Pragmatist

Below is a very interesting perspective from a great writer. I completely agree with this perspective which is why I support Donald Trump!

Mychal S. Massie is an ordained minister who spent 13 years in full-time Christian
Ministry . Today he serves as founder and Chairman of the Racial Policy Center
(RPC), a think tank he officially founded in September 2015.

RPC advocates for a colorblind society. Massie was founder and president of the
non-profit “In His Name Ministries”. He is the former National Chairman of the
conservative black think tank, Project 21-The National Leadership Network of
Black Conservatives and a former member of its parent think tank, the National
Center for Public Policy Research.

Trump is not a liberal or conservative, he’s a Pragmatist.

We recently enjoyed a belated holiday dinner with friends at the home of other
friends. The dinner conversation was jocund, ranging from discussions about
antique glass and china to theology and politics.

I said that I neither view nor do I believe Trump views himself as a
conservative. I stated it was my opinion that Trump is a pragmatist. He sees a
problem and understands it must be fixed. He doesn't see the problem as
liberal or conservative; he sees it only as a problem. That is a quality that
should be admired and applauded, not condemned. But I get ahead of myself.

Viewing problems from a liberal perspective has resulted in the creation of more
problems, more entitlement programs, more victims, more government, more
political correctness, and more attacks on the working class in all economic
strata.

Viewing things according to the so-called Republican conservative perspective has
brought continued spending, globalism to the detriment of American interests
and well being, denial of what the real problems are, weak, ineffective,
milquetoast leadership and afraid of its own shadow. In brief, it has brought
liberal ideology with a pachyderm as a mascot juxtaposed to the ass of the
Democrat Party.

Immigration isn't a Republican problem – it isn't a liberal problem – it is a problem that
threatens the very fabric and infrastructure of America . It demands a pragmatic
approach not an approach that is intended to appease one group or another.

The impending collapse of the economy isn't a liberal or conservative problem, it
is an American problem. That said, until it is viewed as a problem that
demands a common sense approach to resolution, it will never be fixed because
the Democrats and Republicans know only one way to fix things and the
longevity of their impracticality has proven to have no lasting effect.

A successful businessmen like Donald Trump find ways to make things work, they
do not promise to accommodate.

Trump uniquely understands that China ’s manipulation of currency is not a Republican
problem or a Democrat problem. It is a problem that threatens our financial
stability and he understands the proper balance needed to fix it. Here again
successful businessmen like Trump who have weathered the changing tides of
economic reality understand what is necessary to make business work and they,
unlike both sides of the political aisle, know that if something doesn't work,
you don't continue trying to make it work hoping that at some point it will.
As a pragmatist Donald Trump hasn't made wild pie-in-the-sky promises of a cell
phone in every pocket, free college tuition, and a $15 hour minimum wage for
working the drive-through a Carl’s Hamburgers. I argue that America needs
pragmatists because pragmatists see a problem and find ways to fix them. They
do not see a problem and compound it by creating more problems.

You may not like Donald Trump, but I suspect that the reason people do not like
him is because: (1) he is antithetical to the “good old boy” method of
brokering backroom deals that fatten the coffers of politicians; (2) they are
unaccustomed to hearing a candidate speak who is unencumbered by the financial
shackles of those who own them vis-a-vis donations; (3) he is someone who is
free of idiomatic political ideology; and (4) he is someone who understands
that it takes more than hollow promises and political correctness to make
America great again.

Listening to Hillary Clinton and Bernie Sanders talk about fixing America is like
listening to two lunatics trying to “out crazy” one another. Jeb Bush, John
Kasik, and Marco Rubio are owned lock, stock, and barrel by the bankers,
corporations, and big dollar donors funding their campaigns. Bush can deny it
but common sense tells anyone willing to face facts is that people don't give
tens of millions without expecting something in return.

We have had Democrats and Republican ideologues and what has it brought us?
Are we better off today or worse off? Has it happened overnight or has it been a
steady decline brought on by both parties?

I submit that a pragmatist might be just what America needs right now.

And as I said earlier, a pragmatist sees a problem and understands that the
solution to fix same is not about a party, but a willingness and boldness to
get it done.

People are quick to confuse and despise confidence as arrogance, but that is common
amongst those who have never accomplished anything in their lives (or
politicians who never really solve a problem, because its better to still have
an "issue to be solved" so re-elect me to solve it, which never happens)
and those who have always played it safe (again, all politicians) not willing
to risk failure, to try and achieve success.

A succinct 4-sentence summary of the 10,535 pages of Obamacare!

Here are the 10,535 pages of Obama Care condensed to 4 simple sentences..

This, ladies and gentlemen, is called "redistribution of wealth" or, by its more common name, SOCIALISM, or “PROGRESSIVE”, the politically correct names for COMMUNISM !

Wow! What a brilliant way to raise money to fund a free service. Aren’t we lucky to have such a brilliant man leading us!