U. S. Top Earners Pay Larger Share of Taxes than any other industrialized Nation

Now this is going to come as shock to you if your news source is the Integrity Free Media working daily to prop up a failing president, but it turns out that the rich in this country not only pay their fair share, the rich in America pay more than the rich in all other industrialized nations!

So the next time you hear the Campaigner in Chief tell you this lie or your liberal friends tell you this lie, refer them here.  Liberals really don't like facts!  But as a friend of mine always says, "facts is facts".

The Wall Street Journal's Stephen Moore has just come out with a new book titled Who's the Fairest of Them All?: The Truth about Opportunity, Taxes, and Wealth in America and he reveals some interesting information about how much the top ten percent of income earners in the United States pay in federal income taxes as opposed to any other industrialized nation in the world.
According to Moore, these earners pay almost half (45 percent) of the country's total taxes. This conclusion flies in the face of the liberal concept that top earners in the U.S. are not paying their "fair share" in taxes. Moore explains:

"The United States is actually more dependent on rich people to pay taxes than even many of the more socialized economies of Europe. According to the Tax Foundation, the United States gets 45 percent of its total taxes from the top 10 percent of tax filers, whereas the international average in industrialized nations is 32 percent. America’s rich carry a larger share of the tax burden than do the rich in Belgium (25 percent), Germany (31 percent), France (28 percent), and even Sweden (27 percent)." 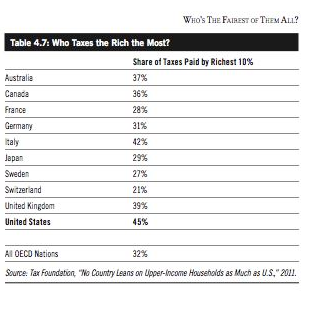