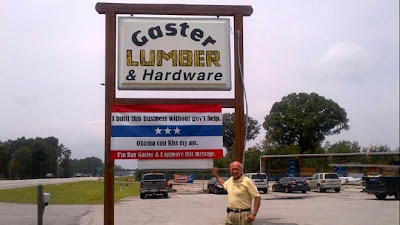 President Obama's message to entrepreneurs that "you didn't build that" prompted one Georgia business owner to respond with a not-so-subtle retort.

"I built this business without gov't help. Obama can Kiss my ass," reads the sign outside              Gaster Lumber & Hardware in Savannah, Ga. Owner Ray Gaster posted that and two similar ones at all three of his company's locations in response to Obama's comments during a speech to supporters in Virignia, which struck a nerve with small business owners around the nation.

Gaster, a Vietnam veteran, told FoxNews.com he built his now 28-year-old business from the ground up.

"I started on my own," Gaster said. "The government wasn't there. We work long, hard hours and what he said is an insult to any businessman."The sign has been criticized for its harsh language, but Gaster said that the rough words were necessary.

"When I heard what he said, I said 'I'm going to give him an answer in Chicago language--something he's used to,'" he told FoxNews.com. "If I would have said 'Dear Mr. President...' there wouldn't have been as strong of a response."

Gaster sent a photo of his sign to 45 of his friends and business acquaintances. He said he wants other businesses to post signs as well.

"We need to stand up to the criticism coming from our own government.  If this economy is to get better, it will be driven by small and independent businesses.  We are part of the solution, not the problem," Gaster said.
Read more: http://www.foxnews.com/us/2012/08/01/georgia-businessman-posts-sign-after-didnt-build-that-debate/?test=latestnews#ixzz22LBYgIhF


Amen Ray, God Bless you and all of us who start and run small business!  Thanks for saying what everyone is feeling.  Now everyone go vote out our Socialist in Chief in November!