Okay I know all you Common Sense Thinker's out there are wondering about this?  And yes, you are seeing the epitome of Liberal stupidity. Of course the liberal nut cases and global warming idiots are all orgasmic about the possibility of making fuel out of chicken fat, but in fly over country, we are all ROFLOA off. 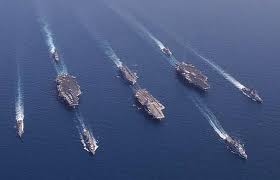 
"A Navy official told FoxNews.com on Monday that sailing the so-called "Great Green Fleet" this month on the 50-50 blend of alternative and conventional fuel is part of Navy Secretary Ray Mabus' plan to have half the Navy fleet on alternative fuel by 2020."


A Navy official said, ""Investments in biofuel will produce a competitively priced -- and domestically produced -- alternative to conventional fuel. Such investments help the Navy and the nation become less dependent on foreign oil and thus less subject to volatility in oil prices that directly affect our readiness."


Just a Common Sense comment based on some simple math!


How in the hell is this going to reduce dependence on foreign oil, since by their own admission this fuel is 26 times the price of current fuel, that means oil would have to reach $2,210 per barrel for this to be effective.  But the geniuses in the Liberal Ray Mabus Pentagon say it will get much cheaper once the Navy really starts using this stuff, so let's give them the benefit of the doubt and assume they are wildly successful at driving the price of this "green" fuel down to say, only 13 times as high as fossil based fuels.  So oil would only have to go to $1,100 per barrel to make this cost effective.  Hmmm!


That my friends is liberal math, fueled by the those who are in abject denial of facts in order to perpetuate the global warming hoax.


What is next, the Great Solar Fleet!


And yes liberals are this stupid and destructive.