What is The Secret to Success?

What is The Secret to Success?

I will tell you that perseverance is the key ingredient to achieving your goals. As far as I am concerned, perseverance is more important than brains, talent or money.  Story after story illustrates how those with perseverance achieved success while others with more money, more talent and more intelligence stopped just short of success.  There is an old story about a young man who went to California during the gold rush days, took all his money and began digging a gold mine.  He hit a vein of gold and was sure he was set, but soon, the vein played out.  The young man continued to dig the mine but there simply was no gold left, or so he thought.  Rather than loose everything he had, the young man decided to play it safe, and sell his mine to an older prospector for enough money to recover his losses and allow him to return back to the East.  The old prospector began diligently digging in the mine he purchased from the young man.  He dug just three feet further when he hit the main vein of gold.  The mine became one of the most prosperous mines in California and the old prospector become one of the wealthiest men in America during the latter half of the 1800’s.   Had the young miner held on, persevered for just three more feet, he would have become rich beyond his wildest dreams.

When you try to achieve something you are guaranteed to have obstacles that get in your way.  The more experience you have the easier it is for you to deal with the obstacles and thus people begin to think you posses special skills or talents. But what is really happening is that your experiences, gained because you persevered, are giving you confidence to overcome bigger and more complex obstacles as they get in your way.  And the bigger your dream the bigger the obstacles you will have to overcome.  That is a fact of life.

To overcome obstacles you must persevere.  As you continue to grow and consistently work through life’s challenges you will notice a pattern as you work through challenges and move on to success.  This pattern is known as the Success Threshold and the graph below illustrates the pattern: 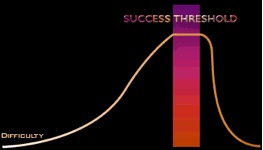 The difficulty level will peak to a nearly an unbearable level, and then sustain.  Think about your life as you have grown from a kid to where you are now.  I noticed this in college.  As I began to take new courses I had never been exposed to, it felt as if I would never master the subject, I was mad, frustrated and ready to quit, but because I was in college and needed the courses I couldn’t quit, so I persevered and all of a sudden, “bam” everything seemed to click together and things got easier and easier in that class.  This happens all your life, with practically every new challenge you face, but until you have enough experience or someone points the pattern out to you, you don’t really realize that it is a repeatable cycle.

The problem is that although this is definitely a repeatable cycle, it is not scientifically defined so there is no way to tell exactly when the peak will hit or how long the sustained level of difficulty will remain.  And sadly, most people interpret the sustained level of difficulty as an impossible barrier and quit, perhaps only moments from reaching their goal or achieving their dream.  But people who are committed to their goals and who understand the cycle learn to look for the pattern.  When they feel the difficulty leveling off and sustaining, they summon up a second wind, they push harder, they hang on longer, and they keep moving forward.  They simply know that a breakthrough will occur.

How can this apply to your life?

Remember the Success Threshold!  Never quit, and when you think you just can't bare to continue, realize you are most likely about to accomplish success, and just keep pressing forward.

Develop the talent and skills you need to accomplish your goals.  In addition to perseverance you do have to have some talent, some vision, some goal, some training and some skills to be successful.  But I am here to tell you that the people who achieve the highest levels of success are not those with the most talent, the most skills, or even the best vision.  The ones who achieve their goals and realize their dreams are the ones that simply fail to quit.  They persevere, they hang on, they keep moving in the direction of their goals and dreams, even when most of those around them are saying them to “give it up”, “get real”, “can’t you just be happy with what you have?”  Their struggles, their little successes along the way, their recovery from failures, helped them develop a confidence that few around them have and even fewer understand.

Persevere and success will come!!!
Posted by Willie P at 8:47 AM