The Most Successful President of My Lifetime! Unfortunately!

I got this from a fellow conservative, I have to take issue with this, Obama has not failed!  In fact I argue, correctly I might add, that Obama is perhaps the most successful president in my lifetime.

He told us what he was going to do from the day he appeared on the political scene.  He said he was going to fundamentally change the United States of America!  This my friends is evidence that he has delivered on his promise!   Of course he was aided and abetted by the Integrity Free Media and the ever increasing number of people who live in this country who prefer to be victims rather than productive citizens.   And he has been enabled by a bunch of RINO's who refuse to do their elected duty and stop his illegal and unconstitunional actions.

So sadly this is, Obama's Success Record, in his mind and those of the all the socialist and communist who have found themselves in power these days! 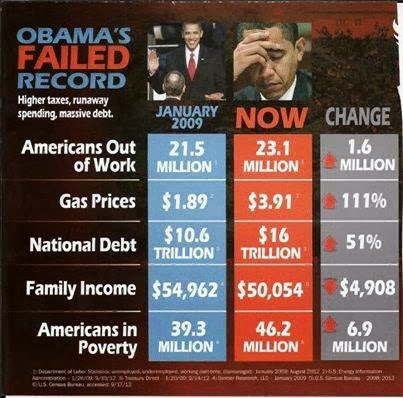