This is a GREAT Country!

Every now and then, in the middle of the constant barrage of crap that’s just pissing us all off these days,
we come across a story, a feat, an event that just makes us stop in our tracks. This was one for the author of this piece. 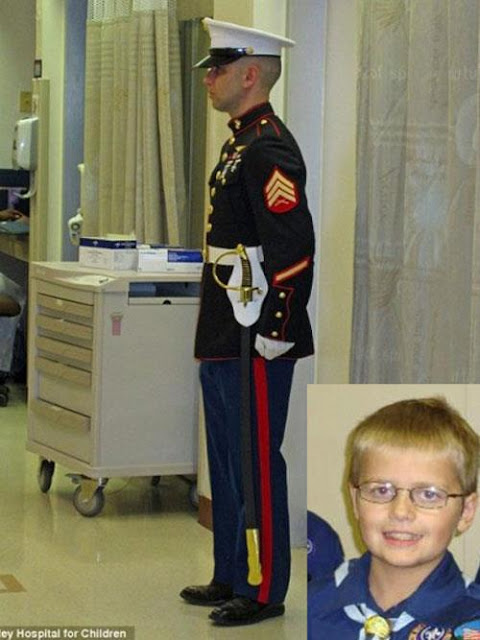 Cody Green was a 12-year kid in Indiana who was diagnosed with leukemia at 22 months old. He loved the Marines, and his parents said he drew strength and courage from the Marine Corps. as ...he bravely fought the battle into remission three times. Although he was cancer-free at the time, the chemotherapy had lowered his immune system and he developed a fungus infection that attacked his brain. Two weeks ago, as he struggled to fend off that infection in the hospital, the Marines wanted to show how much they respected his will to live, his strength, honor and courage. They presented Cody with Marine navigator wings and named him an honorary member of the United States Marine Corps. For one Marine, that wasn’t enough ... so that night, before Cody Green passed away, he took it upon himself to stand guard at Cody’s hospital door all night long, 8 hours straight.

Nowhere on the face of this planet is there a country so blessed as we to have men and women such as this. I wish I could personally tell this Marine how proud he makes me to be an American.?? God ... I do so love this country.